Are you ready to explore the galaxies, have a night under the stars and launch a rocket?

From a sleepover at the Science Museum, missions at the National Space Centre and virtual reality experiences, to STEM workshops and science and faith sessions, grab your helmets and blast off with Space Camp!

Following the success last year of the inaugural Camp, an initiative of the Aga Khan Education Board, space cadets embarked on an out of this world experience. For the first time, Space Camp consisted of two Space Missions -one in London and one in Leicester.  Facilitators and participants alike were humbled by the power of the sun and the planets that surround us as they were treated to a sleepover at the renowned science museum in London for Part 1 of Space Camp followed by activities led by Ismaili astrophysicists. Talks and activities left them with more questions than they entered with, instilling the curiosity and awe that the camp strives to inspire in the young minds of today.

The mission in Leicester brought its own adventures as explorers programmed Mars Rover robots, launched rockets, built moon habitats, entered their very own pop up planetarium in Leicester JK and experienced a VR simulation.

‘Thank you so much for a brilliant camp experience. My daughter had such a wonderful time, picked up lots of knowledge, made new friends and is also exploring the possibility of space/scientific careers when he is older, wow!’ Parent (anonymous)

‘Part 2 has been so much fun…can’t wait to come back again. Will there be a part 3?’

The success of Space Camp 2019 was recognised by the CREST award, nationally recognised and accredited by the British Science Association for students participating in a series of specific STEM related activities. The camp is built on STEM principles, leadership and teamwork, while encouraging fun and creativity, framed within an exciting, immersive experience amidst a backdrop of mankind’s greatest technological achievements in space. 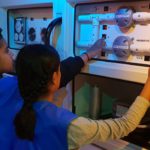 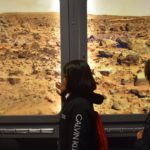 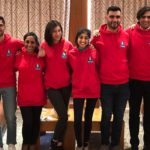 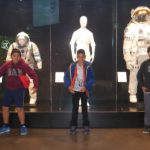 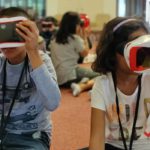 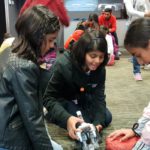 Creating different learning opportunities takes on a completely different approach for 9 – 11 year olds in the UK. During their school holidays 29 boys and girls took up the mantle to become space cadets. The four-day space camp is the first of its kind in the UK resulting from a collaboration with the Aga Khan Education Board, Virgin Galactic, the Science Museum, the Royal Observatory and National Space Centre, in Leicester.

The space cadets had to work out challenges associated with travel in space including programming Mars Rover robots, helping to find a comet, launching rockets, building moon habitats, painting using gravity and many more. Participants had the chance to work with Ismaili Astrophysicists, an American Ismaili based at Virgin Galactic and one of the first space tourists, along with a team of lively facilitators. 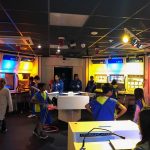 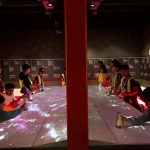 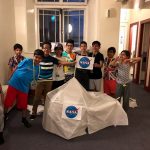 “I wish I didn’t have to wait so long for the next Space Camp. Can I come back again tomorrow?” (Participant)

“Before camp, I wanted to be a designer, a doctor or an actress but now I want to be a mission control space commander!” (Participant)

In our rapidly changing world, the use of technology is not only on the rise, but is essential to participation in the knowledge society. On 20 October 2019, over 150 members of the Jamat attended the Ismaili Centre, London, for the inaugural Science Fair – part of the Aga Khan Education Board (AKEB)’s effort in the UK to promote interest in Science, Technology, Engineering, and Mathematics (STEM).

The AKEB STEM agenda enables young members of the Jamat to experience, discover, and be inspired to adapt to shifting trends in the world; today, and in years to come.

The science fair was first conceived during a conversation with children at the Diamond Jubilee Celebration in Lisbon, about the focus of the different Jubilees. What if the focus during the next Jubilee was on science?  But why wait until then?  “We should have a Science Fair!” said the children excitedly. And so the idea of an Ismaili Science Fair was born.

Dr Jess Wade, a physicist at Imperial College London, began the day with a talk about what science is, the importance of diversity in science, and what to do if a child wants to be a scientist.

Jill Hodges, the CEO of Fire Tech and one of the Science Fair judges, highlighted how science and technology are important in areas where we historically did not expect them to be. Take agriculture, for instance.  One would not traditionally think that science and technology would play a part in this field. Yet modern day agriculture cannot work effectively without it, with farmers using drones, GPS, and tools for data analysis.

The participants then tried their hand at various experiments, and judges observed the experiments, projects, and inventions submitted by children in the Jamat as part of the competition. We went from seeing erupting volcanos to flying balloons to how climate change is affecting the world. The Jamat also learnt about prominent Muslim Scientists and their achievements – teaching us that science has played an important part in Islamic history.

Soon after, attendees heard what it is like to work in science and technology from Mathematician Nahid Walji, Forensic Scientist Farhana Nanji, and Customer Experience Optimiser Shahina Meru. Chaired by Dr Hassan Chagani, the panel discussed how they entered into their respective fields and offered advice on how young members of the Jamat can join STEM fields. They were advised to explore and discover our world, and that science is one way to do it.

Gulzar Kanji, an expert in Early Childhood Education and Development, gave an overview on how parents can support their children to build their science and technology skills even at a very young age.  She highlighted the need to develop their curiosity and to ask questions, and gave advice on how this can be done in the home environment.

The day concluded with judges reviewing the science experiments, projects and inventions entered into the competition. All entrants were highly praised and after long deliberation, a number of winners were announced for projects in health, circuits, optics, and coding.

Not only was the quality of all the projects of a high standard – demonstrating just how innovative the ideas really were – but the confidence with which the children described their projects was inspiring.

This is one part of AKEB’s wider agenda to develop the skills needed for our children to succeed in an evolving future, and to open their minds to the range of possible future careers. The Science Fair is one of AKEB’s initiatives to develop children’s STEM capabilities. Other activities include “Tech Jams” – a two-day hackathon, a Space Camp, and Coding Clubs.

In today’s world, our discovery and understanding of science is evolving rapidly. Days such as the Science Fair open children’s minds to STEM, ultimately enabling them to stay at the forefront of these fields in this rapidly evolving world. We have already entered an era where science and technology is all around us. The need for the future generation to be familiar, and moving with it has never been more critical.

“…there is no greater form of preparation for change than education.” Mawlana Hazar Imam, October 2002

Aga Khan Education Board (AKEB) invites parents and carers of 0-18 year olds to a conference featuring 20+ leading educationalists and thought leaders to answer the following questions:

In an increasingly fragmented environment, it can be challenging to know what to prioritise when making education decisions. This conference covers a wide range of key areas to help navigate you.

Choosing your child’s school can be challenging and it may feel like you don’t have much control over the process. Following our successful 2017 event, AKEB is pleased to offer a range of experts to guide you through key factors to consider when looking at schools.

This interactive workshop brings together experts to give you a chance to find out more about the choices for secondary education, and will cover:

See video from the conference below. PowerPoint presentations available here.

Top tips for choosing a school from Timo Hannay

Top tips for choosing a school from Laura Cunningham

Tech enthusiasts aged between 12-15 took part in the first ever “Tech Jams” event – a 48-hour hackathon for 12-15-year-olds to come together and design, code and create projects solving real-life challenges in dental hygiene, sustainable energy and clean water.

Over 20 participants worked in teams to create solutions to challenges from AKU, AKDN and the UN Sustainable Development Goals.

The event was held at the Aga Khan Centre, London from 13th – 14th April. Participants took part in workshops to improve their technology, design and presentation skills. They also got the chance to work closely with technology mentors and facilitators to help assist building their solutions and present their projects to representatives from companies like Facebook and Accenture.

Each group took on a group identity representing a influential woman in technology – these groups were: Grace Hopper – the architect of programming language COBOL; Annie Easley – a influential engineer at NASA (one of only four African-American employees at the time) and Katherine Johnson, a brilliant mathematician whose calculations of orbital mechanics as a NASA employee were critical to the success of the first and subsequent U.S. manned spaceflights.

Not only did the participants walk away with important skills, one team, Team Katherine Johnson, who presented their Green.ED solution, won a trip to Facebook’s HQ in Central London! 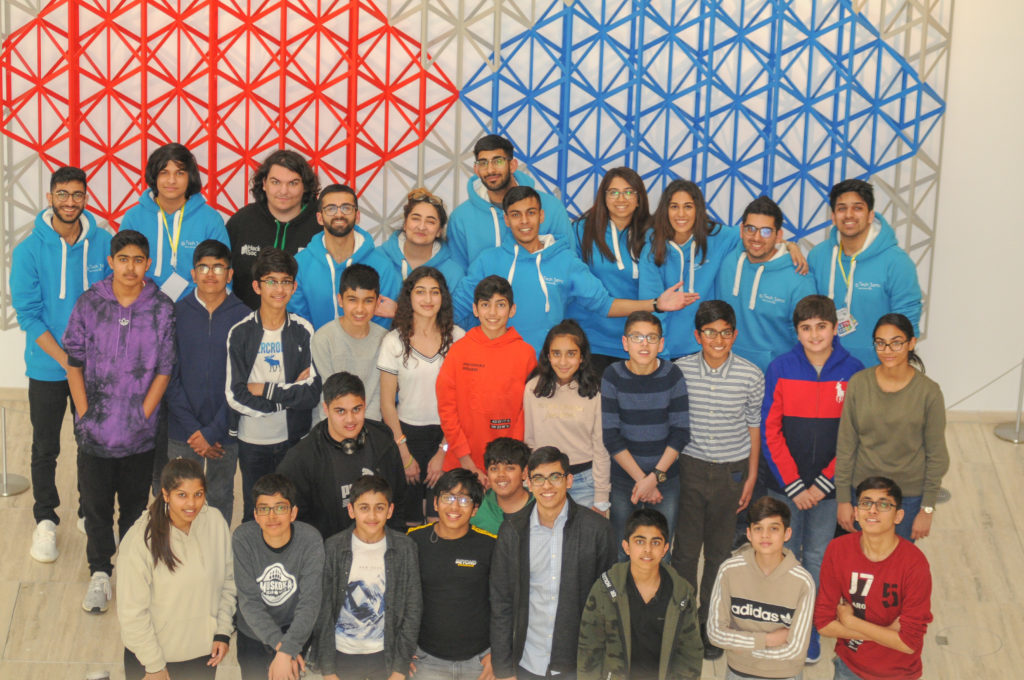 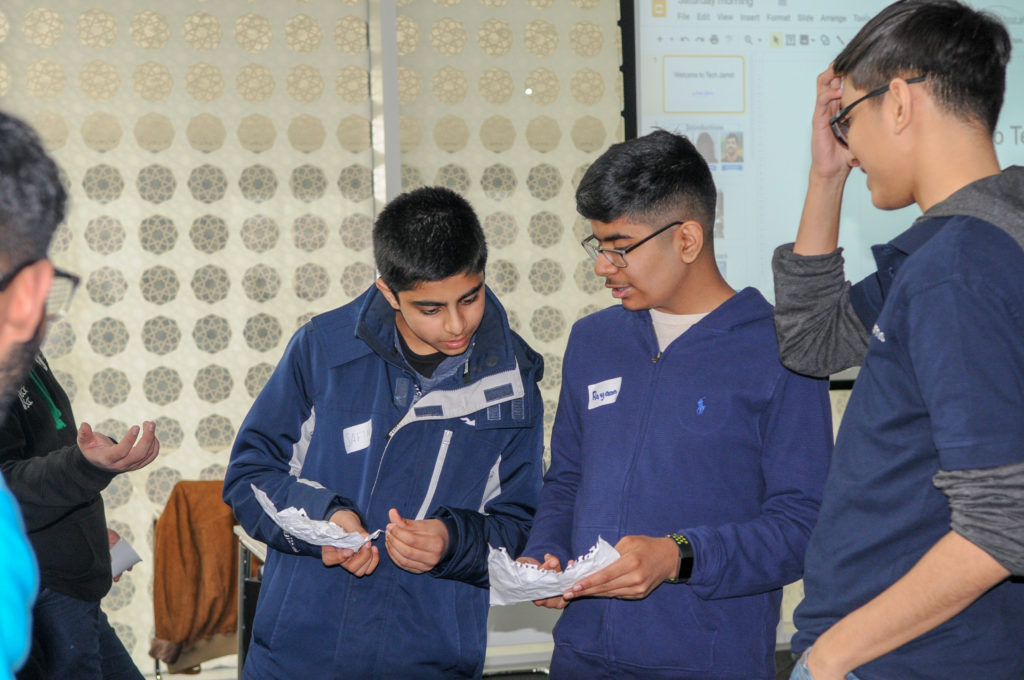 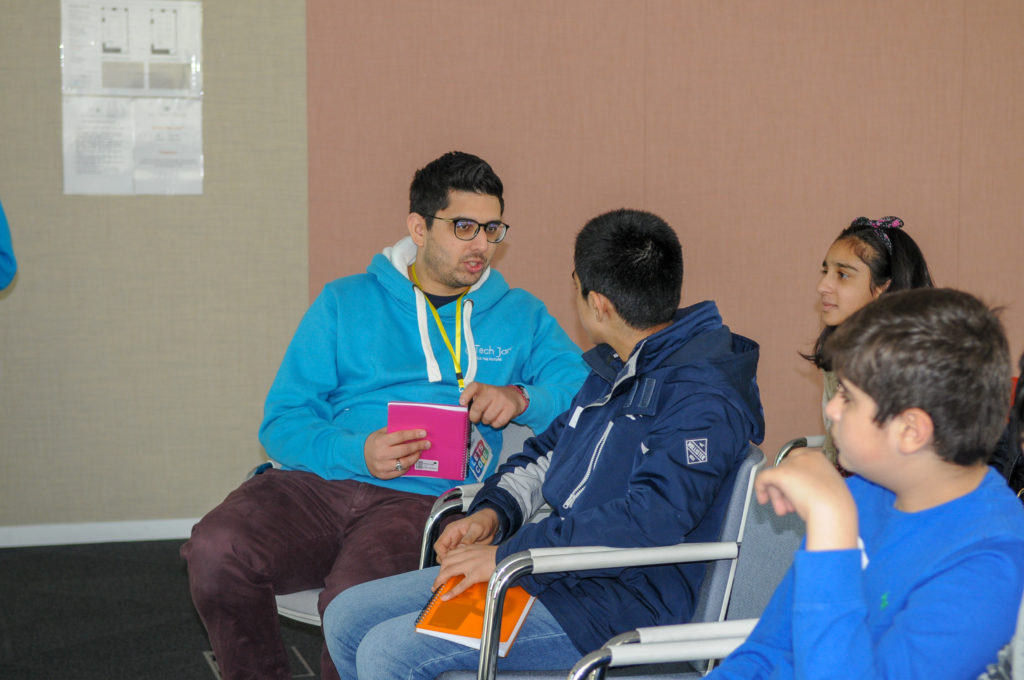 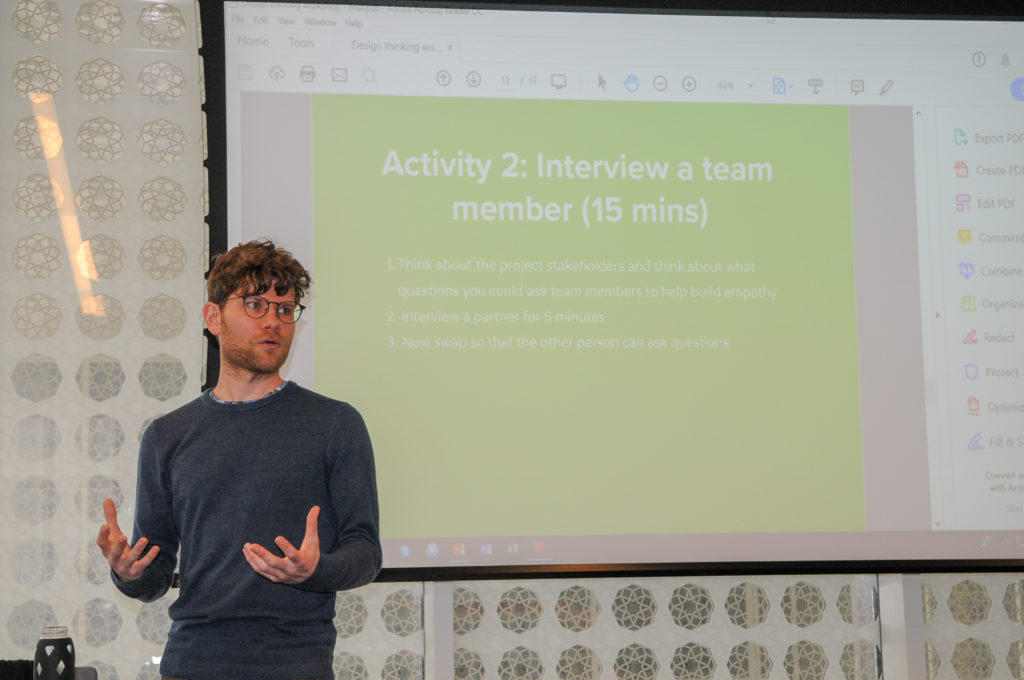 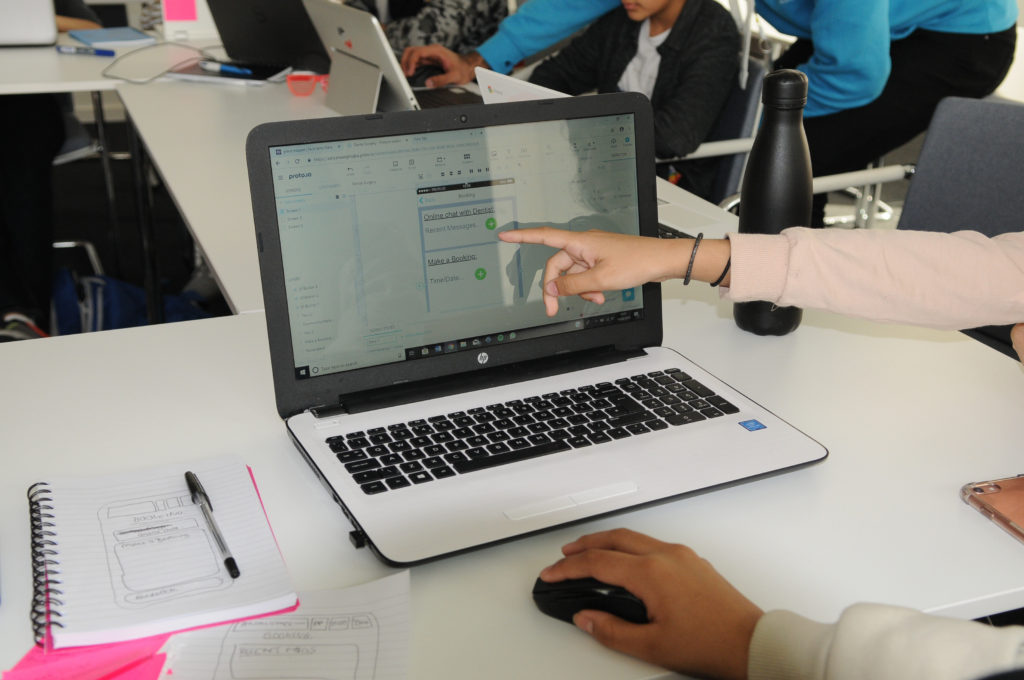 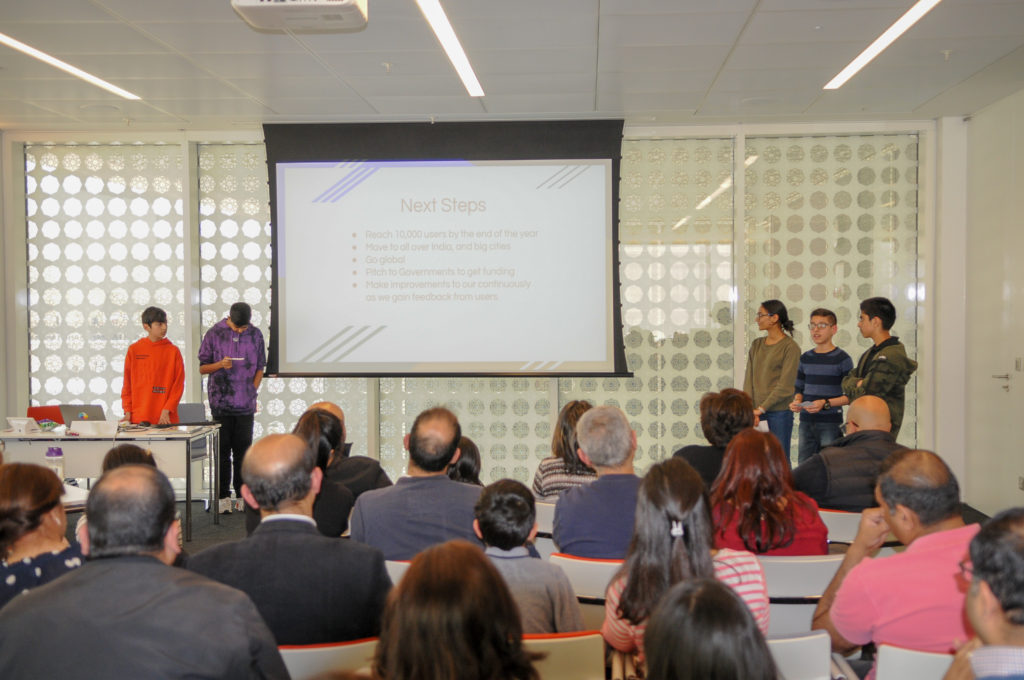